Books and Maps I would recommend for the Loyal visitors to the site,

Disclaimer – I do not profit from any of the recommendations list here.

I know some of you are always looking for good reference books to help in your search for Colorado Ghost towns or perhaps just some old west reading.

If you have not read his books you need to buy some of them. In the mean time check out his new web site. www.kennethjessen.com 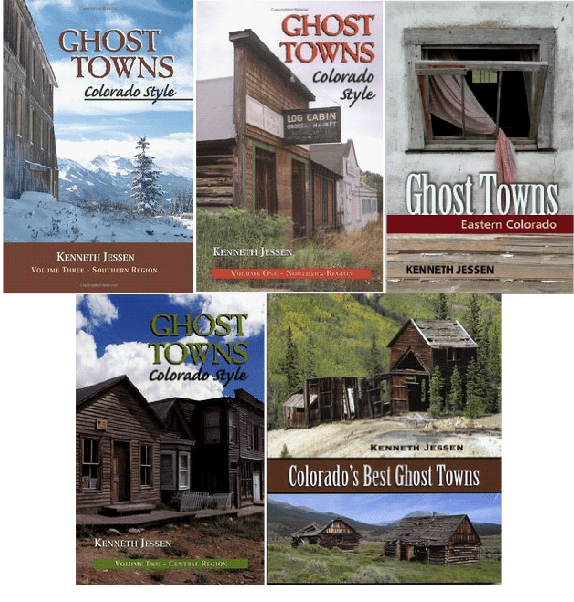 Available with a discount at http://columbineink.com/ Look under the tab for Affiliate Authors. Use use the promo code “FAIRPLAY” to get your discount as a visitor from the Rocky Mountain Profiles web site. That discount code is good for ANY books you buy on their site.

“A Fair Distance” or “Lois Boblett’s Western Memoir, 1844-1922.” Available with a discount at http://columbineink.com/ Make sure to use the code “FAIRPLAY” to get your discount as a visitor from the Rocky Mountain Profiles web site. Also check out their new Ghost town books and calendar for 2010. What is so special – Not only do you get a look at some real pioneers but the book ties in historical events and how those events influenced these pioneers.

In her memoir spanning more than seven decades, Lois Whitcomb Boblett (1844-1925) writes of the day-to-day struggle to settle the West. Lois and her family homesteaded in Iowa and Nebraska, prospected for gold in Colorado’s Pike’s Peak Rush, contributed to the formation of the New Mexico Territory during the Civil War, ranched on the edge of the Arizona frontier, traveled through California, homesteaded in Washington Territory, searched for silver in Idaho, and stampeded to the Klondike.

Lois and Ed Boblett returned to Whatcom County, Washington, where their impact is still recognized today.

For those of you that are not aware John K. Aldrich did much research on the state of Colorado and then in the early 1980’s he published a series of books covering the state. A total of 15 books and a topo map for each one. I have spoken to John on several occasions and I have used his books for reference for 20 years. He did a great job. To see the books come back to print is a great thing. Mine are getting pretty tattered. For all of you interested in Ghost Towns and especially Colorado Ghost towns these are must get books.

Make sure to use the code “FAIRPLAY” to get your discount as a visitor from the Rocky Mountain Profiles web site. Go to their web site and take a look. http://columbineink.com/ and to place your order.

Aldrich, John Kenneth 63, died May 3, 2009. He was born in Hollywood, CA, the son of John Hudson Aldrich and Vera Evelyn Crittendon. An Eagle Scout, John grew up loving the ocean and the cliffs along the California Coast. He graduated from CU Santa Barbara with a Master’s Degree in Geology. He began his career in Denver as a geophysicist. His career took him to all oil producing states, as well as Canada, Mexico, Kenya, and Seychelles. In 1983, John and his wife purchased Centennial Graphics in Denver. He turned his interest in old mining towns into a second career. He wrote and photographed material for 15 books on Colorado ‘Ghost Towns, published by Centennial Graphics. John was a voracious reader. He was knowledgeable on many subjects. He traveled the world extensively following his retirement. He enjoyed sailing Lake Meredith and to Catalina Island. He toured all of the California Missions. He loved his mountain cabin, The Barcoe, near Fairplay, CO. He took particular interest in the Bigfoot sightings in that area. A memorial service will be held there in June. He is survived by a daughter, Cindy Servais, a son, John Aldrich, both of Tulsa, two step-sons Jeff Cline and wife, Joanna, and Greg Cline and wife, Sharon, of Denver, eight grandchildren and one great-grandchild. Donations may be made to the Arapahoe County Humane Society